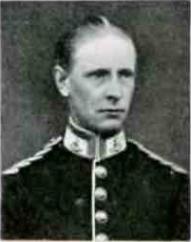 St John Alan Charlton born on the Cholmondley Estate in 1889, the only son of St John and Elizabeth Bronwen Charlton of 9 Sloane Gardens, London.

Educated at Eton, St John attended the Agricultural College of Cirencester and enlisted in the Bedfordshire Regiment prior to the outset of World War 1.

Mr. St. John Charlton, agent to the Marquess of Cholmondley, received the following wire from the War Office on Friday morning: - Deeply regret to inform you that Lieut. St. John Charlton, Bedfordshire Regiment, was killed in action on October 25th or 26th. Lord Kitchener expresses his sympathy.
Lieut. Charlton was the only son of Mr. and Mrs. St. John Charlton. He was formerly in the 4th Bedfords, and only recently he was drafted to the 1st Battalion for active service. He was 24 years of age, and was educated at Eton, subsequently attending the Agricultural College at Cirencester. He was a well-known rider to hounds with the Cheshire Hunt, was fond of a game of cricket, frequently playing for Cholmondley, and he was also an amateur actor of no mean ability. For some years he was a member of the Buckley Church Choir. Great sympathy is extended to Mr. and Mrs. St. John Charlton in their loss of a son who was particularly bright and cheerful disposition, and who won the esteem of everyone he met,." 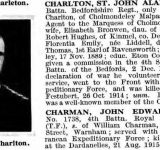 If you can provide any further information on St John Alan Charlton please get in touch by leaving a comment below, using our Contact Form or by calling in to Whitchurch Heritage Centre.