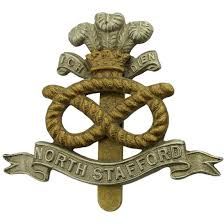 Born: John`s birth was registered in the first quarter 1882 in Corwen, Merionethshire, Wales.

Family: He was the eldest of two children born to Samuel Griffiths, a tailor, and his wife Eleanor. No definite marriage can be found for John.

Residence: At the time of his birth his family were living in Corwen, Merionethshire. Ten years later, with his mother now a widow, they had moved to Green End, Whitchurch, Shropshire. There was no trace of John on either the 1901 or 1911 Census, however his mother was living at 14 St. Mary`s Street,  the address given for him on the 1919 Absent Voters` List for Whitchurch. On the Pension Ledger and Index Card for him, the address of 14 St Mary`s Street was crossed out and replaced by 39 Worthington Street, though who lived there is not known. He was living at 14 St. Mary’s Street at the time of his death.