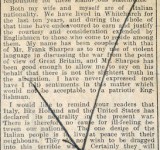 Whereas I, Joseph Fulgoni of Whitchurch, have been subjected to annoyance by the circulation of false and malicious reports concerning my wife’s nationality and my own behaviour in respect of the war. I offer the above reward to any persons giving information leading to the prosecution of those responsible for these slanderous statements.

Both my wife and myself are of Italian nationality. We have lived in Whitchurch for the last ten years, and during the whole of that time have endeavoured to earn and justify the courtesy and consideration extended by Englishmen to those who come to reside among them. My name has been coupled with that of Mr. Frank Sharpes as to my use of violent language in discussing the war from the point of view of Great Britain, and Mr. Sharpes has been good enough to allow me to say on his behalf that there is not the slightest truth in the allegation. I have never expressed (nor have I felt) sentiments in this matter which would not be acceptable to a patriotic Englishman.

I would like to remind your readers that Italy, like Holland and the United States has declared its neutrality in the present war. There is therefore no cause for ill-feeling between our nations. The one desire of the Italian people is to live at peace with their neighbours. They do not wish to be dragged into this terrible war. Certainly they will never be found on the side of Austria. I am sure the Italians now, as always, entertain the friendliest feelings towards England. Many public meetings held in different parts of Italy show clearly that the sympathies of the nation are strongly on the side of England and her allies. For it is my own belief, as it is that of my fellow countrymen, that victory for Germany would strengthen Italy’s most dangerous foe – Austria – while the success of England will be a guarantee of peace and liberty in Europe for many years.

In self-defence therefore. I shall be glad to pay the above reward to anyone enabling me to trace these malicious slanders to their source of origin.