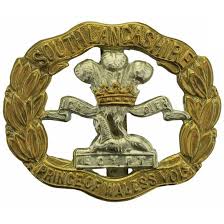 Born: 23 September 1869 and baptised 12 November 1869 at St Alkmund’s Church, Whitchurch. His surname has also been spelt Challoner and Challinor on the various records.

Family: Third of ten children born to Jonathan and Elizabeth Challoner. In 1895 he married Lucy Aaron in Ellesmere and they had three children, Ciceley, Lucy and Jonathan.

Residence: At the time of his baptism the family’s address was Virgin’s Inn which was situated at the north end of Chester Road, Whitchurch. John is recorded living with them in the census returns of 1871 and 1881 but is missing from the 1891 census. Ten years later he was back in Whitchurch with a wife and children residing in Wrexham Road, Whitchurch, Shropshire. In 1919 he returned to Ivy Cottage, Grindley Brook, Whitchurch. By 1939 he was widowed and living in Hawkesmoor, Wem, Shropshire.

Employment: Prior to WW1 Jonathan worked as a farm waggoner. In 1939 he was a retired farm bailiff.

Died: Possibly the Jonathan Challinor who died in Bucklow, Cheshire in 1955 aged 85.

Other Information: Brother of Randle Challenor who also served in WW1.