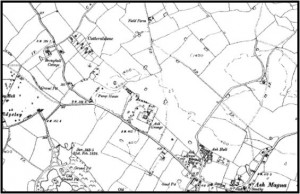 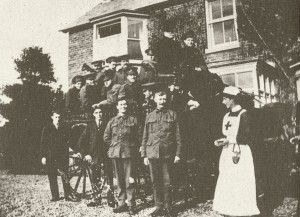 In 1915 the V.A.D. (Voluntary Aid Detachment) Hospital was opened under General Buston and Mrs Lambert in the house of Mr H.L. Storey at Broughall Cottage. They had beds for 20 patients and two trained nurses to look after soldiers from the front. Monetary donations and gifts of food and cigarettes were regularly featured in the Whitchurch Herald.

Philip Buston was born in Twyford, Hampshire in 1853, the son of the Reverend Roger Buston and his wife Anne Mary Buston. He joined the Royal Engineers and became a major in 1889. He served during the Boer War and was awarded the D.S.O. in 1901. After retiring from the army he went to live at Tilstock Lodge, Whitchurch.

Herbert Lushington Storey was born in Lancaster in 1853, the eldest son of Sir Thomas Storey. He had many business interests including the family's industrial firm. In 1882 he married Miss Emily Muriel Fisher of Cheadle and they had two children.  Herbert was a philanthropist, giving money to many academic, educational and social causes. In 1910  Mrs Storey died at Broughall Cottage, Whitchurch. The following year H.L. Storey was elected President of the Whitchurch and District Agricultural Society. He also hunted with the Cheshire, North Shropshire and Sir Watkin Wynn's Hounds.